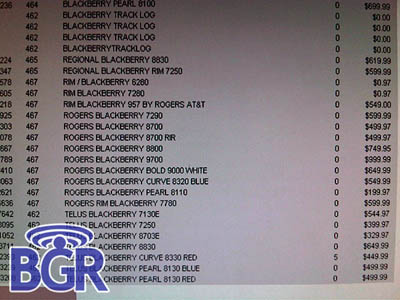 Canadian Berry addicts, excited about the upcoming launch of the BlackBerry Bold 9700? You should be, it’s shaping up to be an ever-so-solid sequel to the Bold 9000… But the 9700 isn’t the topic of choice this morning. I’m talking Bold 9000 love right now!

Over the weekend, we learned that both Bell and Rogers are gearing up to launch a couple of new Bold 9000’s on their network. Yes, the 9000, not the 9700 here! Perhaps this is just a testament to how popular the 9000 really is. Roughly a year since the device’s launch, and the carriers are still releasing new variants 🙂

But I digress… Word is that Bell will have a new Black version of the Bold 9000, while Rogers will pump out a White version of the original Bold. Cool. No details on launch dates or pricing, but stay tuned for more.

Watch Out for Falling Prices on Android Phones at Walmart

Walmart has gone ahead with a price drop on a couple of Android-powered goodies. The original G1 is now available...