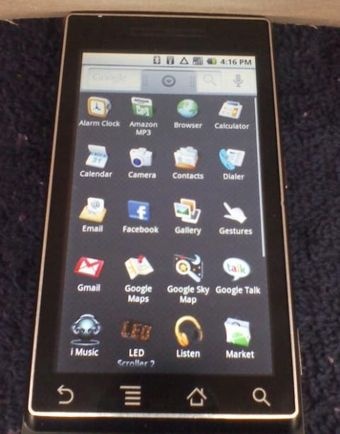 The Motorola Droid (aka Sholes/Tao) and the Motorola Calgary are gearing up to bring Android to Verizon Wireless! How do we know? Well, BGR got their hands on photos of a Verizon Wireless Cellebrite data-transfer tool showing telltale signs of supporting the new Android phones from Verizon. For those of you that aren’t familiar with the Cellebrite, it’s basically a one-click tool that wireless retail employees use to transfer all your contacts data from one phone to another. And, now that Verizon’s fleet of Cellebrites are compatible with the Motorola A855 Droid and A555 Calgary, all signs point to a short term launch. Possibly on December 1.

For those of you paying attention, the Motorola Droid and Calgary are the two Android smartphones that Verizon recently announced would be launched later this year. The Droid is supposed to pack a3.7-inch touchsreen (capacitive is a good bet), 600Mhz ARM-based Cortex A8 CPU (same as iPhone 3GS), 5-megapixel camera and even a secondary Image Signal Processor clocked at 430Mhz – giving it the punch to compete with high-end Android smartphones like the HTC Hero. And, with native Flash support on Android 2.0 (Eclair) the Motorola Droid might just be the Android phone of choice when it goes live.

Your MobileMe data isn't as private as you probably thought it was. Following on T-Mobile's own cloud-service fiasco, a MobileMe...