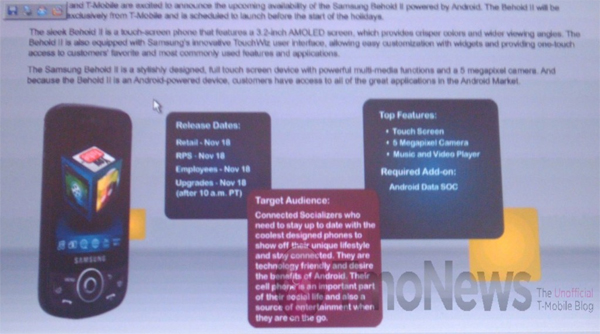 T-Mobile USA was the first carrier to jump on board the good ship Android with the HTC G1, and they’ve since stayed committed to the Google mobile operating system. Following on the recently launched T-Mobile myTouch3G, T-Mobile is now expected to go live with another Google-powered smartphone in the near future. If newly leaked launch documents from TmoNews hold true, we could see the Samsung Behold II bringing its eye-popping AMOLED touchscreen and 5-megapixel camera to T-Mobile’s Android lineup as soon as November 18th!

The rumored launch window falls in line with previous speculation that the Behold II would hit market in time for the holidays. November 18 is a little more than a week away from Black Friday – the Friday after Thanksgiving Day that is usually considered the kick-off to the holiday shopping season – which also bodes well for this rumor.

In related news, there’s also mention of some sort of T-Mobile branded touchscreen handset called the T-Mobile Tap coming down the pipeline on November 11th. Most of you probably won’t care about a T-Mobile touchscreen phone from a no-name manufacturer, but there you go.

Want to end calls by closing the slider? There’s a Palm Pre patch for that.

Wish you could end phone calls on your Palm Pre by simply sliding the slider closed? Well, there's now a...