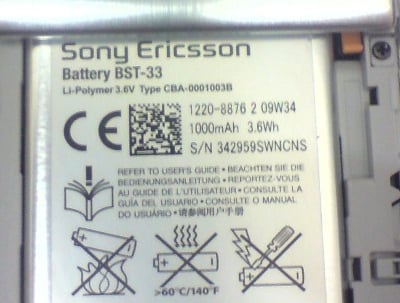 Steve O’Hear is in London this week for the 2009 Symbian Exchange and Exposition and had a brief sit down with Anders Westin, Head of Software Relations, Sony Ericsson. Several questions were asked, mainly concerning Sony Ericsson’s current portfolio which spans every single smartphone operating system under the sun, including, hopefully, Android 2.0 on the XPERIA X3, but the kicker was Steve asking Anders why the Sony Ericsson Satio had such a piss poor battery. The Satio, for those unfamiliar with the device, has a 3.5 inch touch screen, runs Symbian S60 5th Edition and has a 12 megapixel camera. It eats batteries for breakfast. Sony Ericsson has been shipping the Satio with a 1000 mAh battery, and when Steve brought this up to up with Anders, he seemed a bit shocked. “Don’t you mean 1350mAh?” he said, lifting the battery cover off his device to reveal a 35% larger 1350 mAh battery, to which Steve, and many customers around the world, replied “ummm no. what the fuck?”

Sony Ericsson is preparing to unveil new phones on November 3rd. The special "What's next?" mini-site has been prepared for...