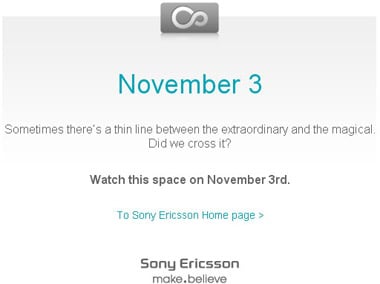 Sony Ericsson is preparing to unveil new phones on November 3rd. The special “What’s next?” mini-site has been prepared for the occasion, hinting us we could finally see the Swedish-Japanese handset maker releasing something official on their Android plans. Yap, we hope to see the Xperia X3 announced, now that we’ve seen it in in-the-wild photos.

I’ll only remind of you of the X3’s specs – this baby should pack a 4-inch WVGA screen, 8-megapixel camera, and a 1 GHz Snapdragon CPU. In that sense “I want it” is an understatement. 😉

T-Mobile is Sony Ericsson's main partner in the U.S. and now we have the two companies launching the mid-range clamshell,...