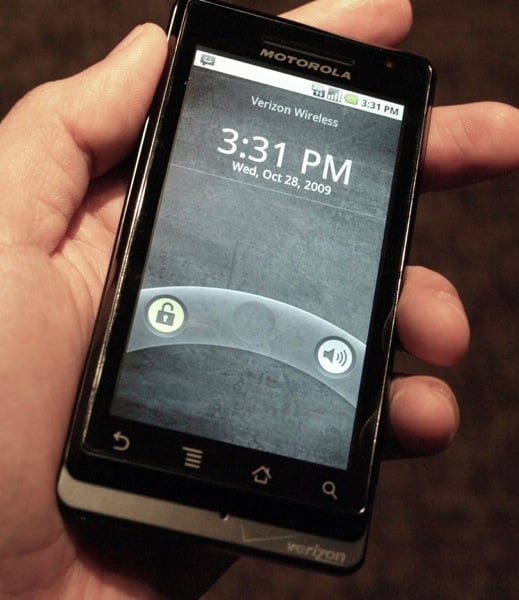 The Motorola Droid went live as Verizon’s first Android phone earlier this morning. Then, Google announced that their Google Maps app for Android 2.0 now supports GPS turn-by-turn directions with voice guidance. The two announcements merged, like that those really big storms in that one movie involving a fishing boat of some sort, to form one of the biggest product launches of the year. I just got a chance to put my hands all over the Motorola Droid and thought I’d let you in on my initial impressions (and from-the-hip pics). The short version: Verizon’s Motorola Droid is badass. Keep reading for the long version (and a massive hands-on photo gallery. 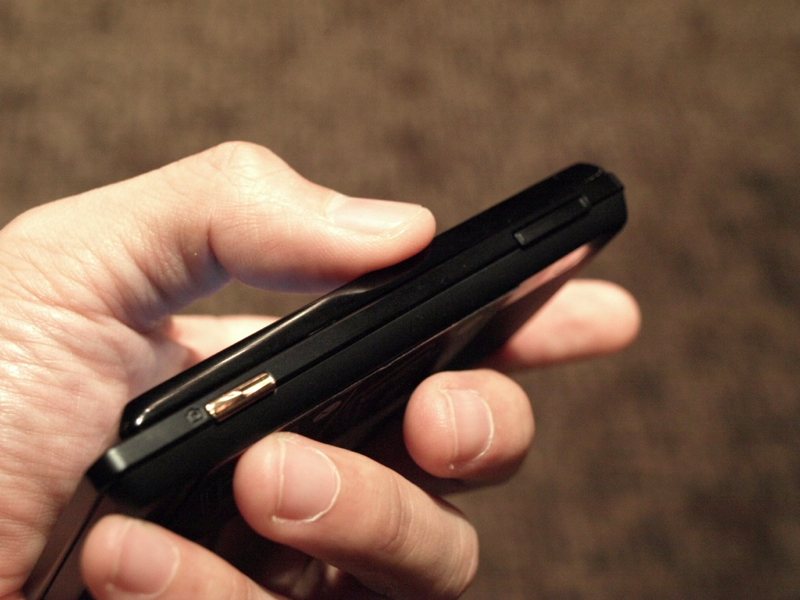 First, the Motorola Droid is slim – 13.7mm, to be exact. You’re probably not used to seeing a QWERTY slider as svelte as the keyboard-less iPhone 3GS, so the slim-waisted Droid is a pleasant surprise. Unfortunately, all that thinness comes with sacrifices. The keyboard is decent, but the keys are almost completely flat and don’t offer too much travel. Thankfully, there’s a satisfyingly tactile “click” to the keys that makes the keyboard quite usable. It’s also good to see the top row sporting numeric alternatives and a dedicated “@” key.

The Droid is pretty. The little stub that extends below the bottom of the screen might look a bit awkward in photos, but in person the Droid is one attractive smartphone. Navigation buttons are flush mounted, making for clean look. The Droid’s sharp lines and modern industrial design remind me of Motorola’s glory days when the RAZR’s innovative design reigned king in the mobile phone market. And, with a soft-touch backside, the Droid is as pretty as it is fun to hold.

As for features and specs, the Droid is one power-packed handset. It’s got more than enough processing power to run its Android 2.0 OS without any noticeable lag or stuttering. Screen rotations execute without hesitation and menus pop up nice and fast. The 5-megapixel camera is impressive, as is the dual-LED flash and HD video recording at 24fps. The one video recording that I saw 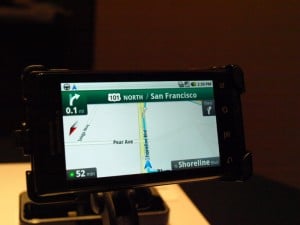 demonstrated on the Droid looked crisp and smooth, even at less than 30fps. The huge 3.7-inch capacitive touchscreen is bright and responsive. Then there’s the microSD card slot pre-loaded with a 16GB microSD card. Can you say multimedia monster?

Google Maps Navigation is awesome (our video demo here). There’s a reason Garmin’s stock dropped through the floor this morning. Not only does Google provide turn-by-turn GPS navigation with voice prompts, the Google Maps Navigation feature allows you to overlay all kinds of data layers on top of your route – you can view traffic along your specific route, or you can find  nearby gas stations, or Hilton hotels, or burger joints, or convenience stores, or… you get the idea. And, the ability to view your navigation route on top of Google Maps’ satellite view is amazing. There’s even a street view mode that gives you a look at what the upcoming turn looks like in real life!

More video and photos to come. For now, here are some quick shots of the Droid and its Android 2.0 UI.

Photos and a Video: The GSM Motorola Droid, found in Vietnam

Don't ask, don't tell, that seems to be the policy in Vietnam where somehow gadget site tinhte.com gets the latest...