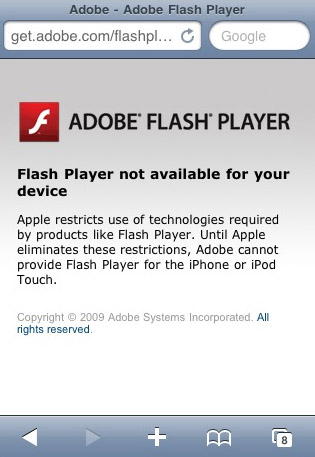 Ever tried visiting Adobe’s “Download Flash” page from an iPhone or iPod Touch? It’s hilarious as you can see from the screenshot above. Since Adobe couldn’t get Apple to support Flash in the iPhone’s Safari, they decided to try to pitch the end users who could eventually notify the Cupertino folks to act on the matter. I’m guessing Adobe’s thinking is that once a user sees this message, he or she will immediately write an email to steve@apple.com saying just how frustrated he/she is because his beloved devices can’t handle Flash. That, of course, will force Apple to change its ways and accept the inevitable by adding Flash support to Safari. Hmmm, something doesn’t work here, right? 😉

LG SB210 is made for Korea-based golfers