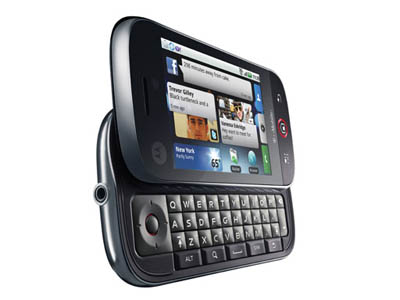 The Motorola CLIQ is hailed as Motorola’s first stab at reclaiming some of their lost mobile phone market share, and it just might be able to live up to expectations. Motorola and T-Mobile announced the CLIQ a little over a month ago, showing off the Android phone’s innovative MOTOBLUR interface and its ability to magically update its homescreen widgets with information from your social networks and news feeds. Today, T-Mobile has gone all official with the Motorola CLIQ in the US. No more pre-order, folks – the CLIQ is live!

T-Mobile’s CLIQ has the distinction of being Motorola’s first comeback handset as well as the company’s first Android phone to hit market. The CLIQ is decidedly more curvy than its evil brother, the Motorola DROID, but it packs a cutesy-punch. The CLIQ sports a 3.1-inch capacitive touchscreen, 5-megapixel camera, slide-out QWERTY keyboard, GPS, WiFi, 3G data, 3.5mm headphone jack and microSD card slot. But, the CLIQ’s highlight feature is its MOTOBLUR UI. Motorola created its custom MOTOBLUR Android UI to work with special MOTOBLUR servers to constantly monitor your social networks and news feeds. When something new happens or someone posts an interesting (sometimes not so interesting) tidbit to their profile, MOTOBLUR pushes that information to one of your homescreen widgets. Social butterflies, take note, MOTOBLUR will help you stay connected!

And, to help celebrate the Motorola CLIQ’s launch, Motorola and T-Mobile have announced a contest for college students. The college to sign-up the most Facebook fans to T-Mobile’s fan page will win a free campus concert by Weezer, and up to $25,000 for their school. Even better, you don’t even have to buy a CLIQ to enter the contest! Find out more here.

Fans of Motorola’s curvy Android phone can walk into any T-Mobile USA retail store or go online to nab their very own Motorola CLIQ for $199.99 with new 2-year contract and mail-in rebate. The CLIQ comes in your choice of White or Titanium color schemes.

Looking for a little more Android love north of the border? What if I told you Rogers has tossed the...