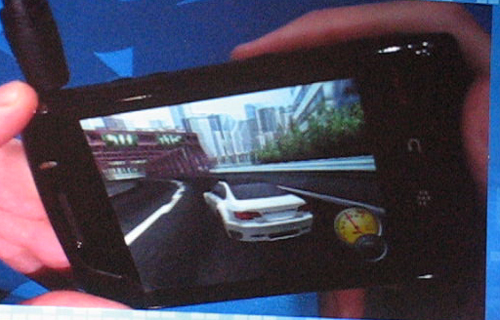 Gaming on BlackBerry has never been what you would call breathtaking – a few low-key casual games here and there and the preloaded Brickbreaker could handle the lion’s share of twitchy boredom. Well, the platform is taking a big jump as OpenGL ES support has gone official and is currently available in the beta BlackBerry JDE we had mentioned earlier.

The in-app purchacing sounded vaguely iPhone OS 3.0, and OpenGL even moreso, but between these multimedia improvements and BlackBerry’s existing expertise in productivity, the whole platform is feeling a lot more balanced. Shown here is Need for Speed, which we’ll have some hands-on footage of shortly, complete with gesture controls for brake and boosting, and accelerometer use for steering. There’s going to be at least one other big name game showing off what OpenGL on BlackBerry can do, and we’ll be sure to check it out.