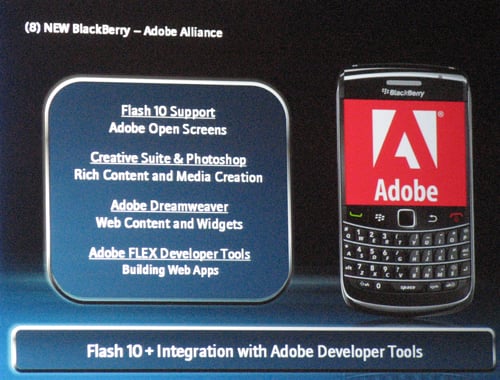 While Adobe might be taking potshots at Apple for not providing the footholds to get Flash on the iPhone, RIM has announced that upcoming versions of Creative Suite 5 will allow developers to import Flash content in a BlackBerry-friendly format through the Eclipse JDE plug-in. So, yeah, Flash on BlackBerry. We had heard this was coming, and it’s great to see something good and official, though we’ll only really understand the scope of this announcement once we see developers do something with it (similar to the Google Gears and widget support in OS 5.0).

Adobe’s participation extends to all of their popular tools, like Photoshop, Dreamweaver, Illustrator at first, Fireworks, and plenty of other popular apps already being used by web developers will be available later; AIR is in the works. This all elaborates on the Open Screen Project Adobe was talking about not too long ago, and has the potential to make the BlackBerry experience a heck of a lot more enjoyable. Flash-enabled widgets are a great weapon against Android and webOS who have had the benefit of creating a smooth user interface from the ground up; RIM is shackled to their old OS, and as we all know, it’s hard to teach an old dog new tricks. Well, BlackBerry, prove us wrong – let’s see some new tricks.

Creative Suite 5 should be coming out in 2010, along with all of this BlackBerry support, but you can find more details on RIM’s Adobe tools here. Stick around for more announcements and news from the BlackBerry Developer Conference!

UPDATE: Quick clip of the simulator running Flash video after the jump. Sure, it’s not a real device, but it’s a pretty solid step.