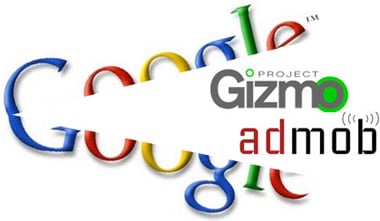 In a single day we caught two news items where we have Google on one side and a smaller company being acquired on the other.

The first news item deals with mobile advertising network/platform – AdMob. The search giant paid $750 million in stock with the idea to obviously dominate the mobile ad market just like they do on a desktop. AdMob is the single largest iPhone ad network and has recently acquired AdWhirl, the company that serves mobile ads from multiple sources. In addition, AdMob also covers other platforms, Android included. Among their clients are such well known companies like Ford and Coca-Cola.

In the other news, Google has acquired VoIP company Gizmo5 for $30 million in cash. With this deal, the search giant gets a true SIP/VoIP provider under its belt opening up new possibilities for its Google Voice service. Moreover, there are certainly some Gizmo5’s assets that could be used to improve Google Talk.

And that sums it up. I’ve no doubts AdMob’s assets will be used properly — after all advertising is Google’s cash cow — but for Gizmo5, I’m not sure. There are certainly some interesting things Google could do with it, but we thought the same for Orkut and Dodgeball, and where are they now? Any thoughts?

One of the many announcements made at the BlackBerry Developer Conference is a new ad partner program that allows app...