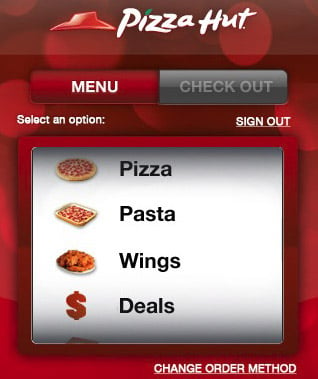 Remember Pizza Hut’s cool iPhone app? It proved as a smashing success, generating $1 million in sales! To be fair, we’re not sure whether the company would generate these figures even without the dedicated application, but it certainly helped make the famous pizza maker more cooler in eyes of the iGeeks.

What’s more impressive is that the iPhone app has been introduced only three months ago and that’s in the U.S. only. We’re certain the numbers will keep rising as soon as we get French, German, Italian, Spanish and other versions that work in more countries.

According to Pizza Hut’s Bernard Acoca, they’ve seen a steady level of growth with their mobile website, but the introduction of the iPhone app made the mobile orders growth explosive. “iPhone applications capture consumers’ imagination in a way that WAP sites simply can’t do, so the decision to expand to the iPhone was as good one for us,” he added.

Finally, if you live in the U.S. and own an iPhone/iPod Touch, you may want to grab Pizza Hut’s iPhone app (if you still haven’t). AppStore link is here.

Jailbroken iPhones in Australia get hit with first iPhone worm

Jailbroken iPhones beware, if you have SSH installed, you're going to want to change your default root password quick. Like...