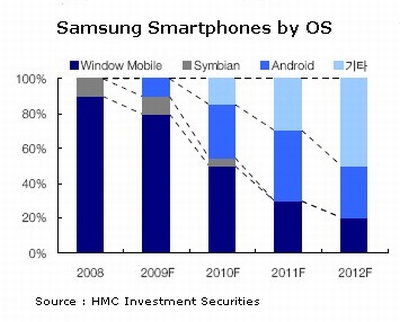 Samsung, who is a member of the Symbian Foundation, is supposedly going to stop producing Symbian devices by 2011 if a report from Digitimes is to be believed. Senior Vice President Don Joo Lee said the South Korean company will continue to focus on Android, Windows Mobile, and the yet to be revealed Bada, mobile operating systems. By 2012 Samsung will have only 20% of their smartphone portfolio running Windows Mobile, with the rest being split between Android and Bada. Considering most Samsung Symbian devices never really did all that well to begin with, mostly because finding them was not an easy task, they’re not going to be missed. This does bring up an important question however: except Nokia, who else is going to be making Symbian devices in 3 years?