BBDC was unexpectedly busy – hear how the devs feel about it all! 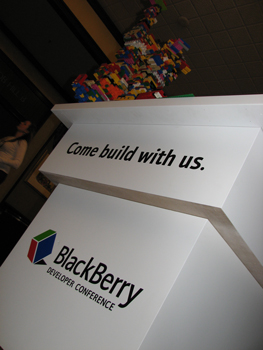 If you haven’t been following, the 2009 BlackBerry Developer Conference was the source of a lot of big announcements, like OpenGL support enabling some rich 3D graphics, an Adobe partnership that cements Flash on BlackBerry, and a long-overdue LinkedIn app. This episode of The Signal focuses a lot on themes, as we have the fine folks from BlackBerry Theme Park and themes4bb giving us our take on the new Theme Builder Studio. The winner of the BlackBerry (NSDQ: RIMM) Partner’s Fund challenge, James Shannon from DevelopIQ, gives us some feedback from the app developer side, and how all of the various announcements impact the 7digital music store. No conference is complete without hooking up with some fellow bloggers – Ronen Halevy from BerryReview and Kevin Michaluk from CrackBerry weigh in on the show overall, and what RIM’s future with developers is looking like.

At points it’s a little technical, but if you’re into BlackBerry, development, or user interface stuff, this is the podcast for you. Hit the jump!

Sorry about the audio quality,  it was tricky finding a quiet spot to record.

Music by The Red Jumpsuit Apparatus, as featured on Tap Tap Revenge for the iPhone.

The Signal is a part of the Tech Podcasts Network.

P.S.: The guy who hops in around the end is CB’s very own Bla1ze.

The BlackBerry App World got some love at the Developer Conference keynote, with the announced inclusion of web-based widgets and...