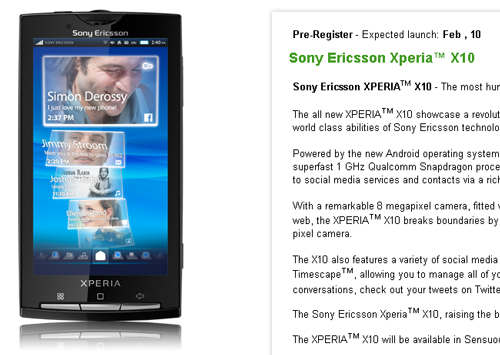 Sony Ericsson UK’s X10 launch page has spelled out their launch window in black and white: February is the month to hold out for. The most we got out of the announcement of SE’s impressive Android handset was an expected release in the first half of 2010, so it’s good to have that narrowed down a bit. The X10 promises to be the biggest, baddest Android handset out there – an 8 megapixel camera, 1 Ghz processor, and 4-inch WVGA display put it head and shoulders above the HTC Hero, and will give the Motorola droid a run for its money. Their custom Timescape user interface is exceptionally slick, all practicality aside. If you’re interested in a prerelease tour, check out this video.

Well, what have we here? Electricpig.co.uk have been on the case, and spotted an Android Tablet. Nothing too special about...