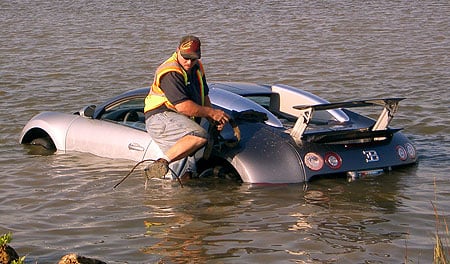 There aren’t too many things super-exotic sports cars, like the $1+ million Bugatti Veyron, hate more than being sentenced to a life of grocery-getting and night-on-the-towning. Salt water is high on that short-list. Being driven by a cellphone-distracted driver also makes that list. Combine those two super car pet-peeves, and you’ve got the makings of a disaster… the kind of disaster that ends with a Bugatti Veyron half-submerged in a salt water marsh Texas.

Rather than let his super car of super cars wind out its four turbo-chargers on some smoothly-paved track or a private airstrip, the Lufkin, Texas man took his million-dollar car for a drive on I-45 in La Marque. He tells police that he was startled by a low-flying pelican that caused him to drop his cellphone. He could have let the cellphone sit there until he pulled over, but apparently decided to reach down and retrieve the mobile phone while driving. The result? He took the Veyron off-road and into a briny marsh.

A driver on an adjacent highway lane managed to record footage of the accident as it happened. The video isn’t all that clear, but we can’t see any pelicans flying anywhere near the Bugatti Veyron. There does, however, seem to be an abundance of dumbass-ness surrounding the car at the time of the accident.

The cops say the Texas man wasn’t injured, but we beg to differ. Broken bones heal, bruises go away, but this guy is never going to live down the fact that his mobile phone distracted him enough to drive into a marsh. There’s also a lesson about not using your cellphone while driving somewhere in this story. If you find it, let us know.

This is the accident:

This is the aftermath:

Usually the construction of new a new cell tower meets opposition from surrounding communities... At least, that has been the...