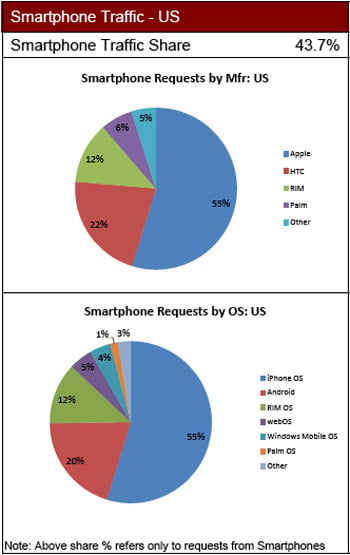 The iPhone is a data hog. Just ask AT&T and their strained 3G data network. Data-hungry iPhone users seemingly aren’t able to satisfy their thirst for online information. They’re so ravenous for the all things internet that, according to AdMob, the iPhone accounts for 50% of all smartphone web traffic around the globe. Here, in the US, the iPhone pulls down 55% of all smartphone traffic, mostly through AT&T’s 3G network. That’s a lot of data!

It’s not just the iPhone, either. The smartphone boom has raised Android awareness high enough to boost traffic from Android smartphones to 11% worldwide. In the US, the effect is even more pronounced – Android handsets are responsible for 20% of all smartphone traffic in America. Compelling new Android offerings like the Sprint HTC Hero and T-Mobile myTouch 3G (as well as their European variants) have helped drive up Android market share. Android is fast closing the gap between itself and the iPhone platform.

But, it’s not all roses and rainbows in the smartphone sector. Nokia has long led the mobile phone market in terms of market share, but has recently been losing share to the likes of iPhone and Android smartphones. The Finns (Nokia) are responsible for 24% of worldwide traffic, with the Symbian platform sending out 25% of all worldwide smartphone web requests. The BlackBerry OS dropped to just 7% of global smartphone requests. Windows Mobile fared even worse, claiming just 3% of global requests. Palm’s webOS, despite a European launch of the Palm Pre, dropped down to 2% of the world’s smartphone traffic. 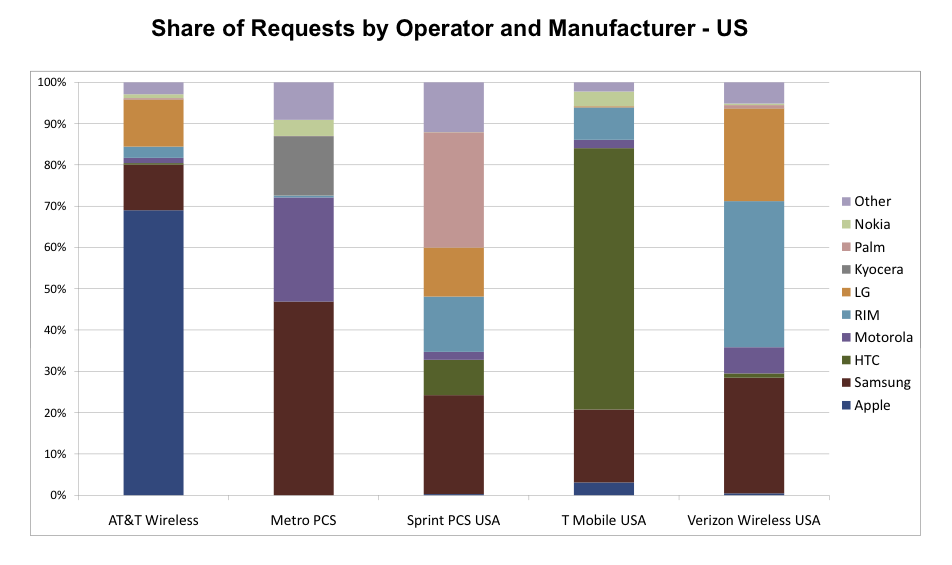 The moral to this story? Smartphones are on the rise. But, it’s not enough to just run a smartphone operating system – consumers are flocking to intuitive touchscreen platforms with desktop-class web browsers. The iPhone and Android platforms obviously meet these criteria. Nokia, BlackBerry, Palm and Microsoft should be asking themselves why their offerings don’t.

Previously, there were rumours that Sony Ericsson's X1 would get an update to Windows Mobile 6.5 after a supposed leaked...