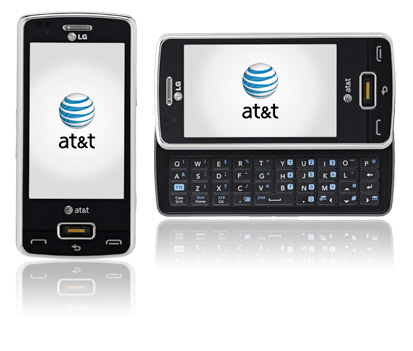 AT&T has outed a new WinMo handset from LG, branded the eXpo. The two main bragging points the eXpo has going for it is the 1 Ghz processor (which AT&T isn’t shy about saying being the first on a handset in North America), and the option for a snap-on pico projector. Besides running Windows Mobile 6.5 Professional, the eXpo rides on 7.2 Mbps HSPA, packs a 5 megapixel camera with flash, and aGPS for navigation. Combined with a fingerprint sensor, the eXpo sounds like it will do well in a high-demand enterprise setting.

I got some time to play with the telus version a few weeks ago, dubbed the IQ, but had a hard time getting excited about it when put next to the Milestone, Hero, and Bold 9700. Regardless, AT&T does earn some brownie points for bringing something with a 1 Ghz processor to the U.S., and there are doubtlessly some corporations out there who are in need of the eXpo’s relatively unique features.

You can pick up the LG eXpo for $199.99 on contract after rebates starting December 7; the projector add-on will cost an additional $179.99.

Samsung has announced the M8400 on South Korean KT, featuring WiBro connectivity (their version of WiMAX). It's conencted otherwise to...