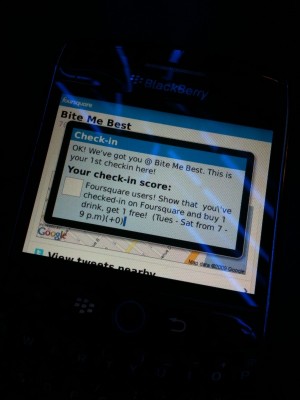 A location-based social networking and points of interest app, Foursquare, is finding its way to BlackBerry after getting settled into Android and iPhone. If you haven’t heard of it (I know I haven’t until now), it’s a neat system for users to check in at specific destinations, kind of like BrightKite, only you get points for doing it. The more points you get, the more badges you unlock. You can claim the title of Mayor at some of your favourite spots, and at participating locations, you can get freebies for being such a devout patron. Even if you’re just checking in, you can get stuff like two for one coupons, as shown here. Even if you can’t get your mitts on the official client, Foursquare has also opened up some APIs for developers to include the service, which Layar has already taken advantage of.

This screenshot was posted to the CEO’s Flickr account not too long ago, and though it apparently has some bugs, it’s well on its way and should be publicly available sometime in early December.

[via The Next Web]

The boys and girls in Waterloo (RIM) have released Service Pack 1 for BES 5.0 for Microsoft Exchange and IBM...