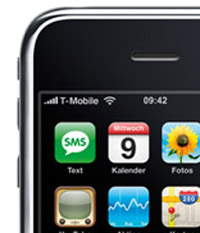 Rumors of a Verizon iPhone have been cooking for a long time now, but Verizon’s recent Droid attack on the iPhone has some thinking a Verizon iPhone may not materialize next year, if at all. One analyst makes the case for the iPhone going to T-Mobile USAs network in 2010, when ATT is expected to loosen its exclusive grip on Apples smartphone.

Its becoming apparent that Verizon is aligning itself with Google and pushing compelling new Android-powered phones like the Motorola Droid as more powerful alternatives to Apples arrogant little iPhone. That puts Verizon at odds with Apples interests. Meanwhile, T-Mobile has been quietly waiting on the sidelines, watching the game unfold. Thomas Weisel analyst Doug Reid believes that T-Mobile is poised to pick up the iPhone next year, helping Apple give the finger to Verizon.

The move would make sense. Verizons CDMA network is incompatible with AT&Ts GSM-based network, and would require new iPhone hardware. Apple would have to make a custom batch of iPhones solely for Verizon Wireless. T-Mobile, on the other hand, has a compatible network (nevermind their wacky 1700Mhz 3G network), and would be a convenient fit for the iPhone.

Still, T-Mobile USA has only half of Verizon’s subscriber base, making it a less lucrative target for Apple. Reid expects Apple to cash in on the larger Verizon Wireless network by peddling future non-iPhone devices made for Verizon’s soon-to-launch 4G LTE network. Unfortunately, we may not see any Apple hardware offered by Verizon until sometime in 2011.

We’ll have to wait for Apple’s next iPhone announcement, hopefully in mid-2010, before we know for sure what’s going on with the iPhone in the US. We may not see the iPhone brand hitting Verizon, but an Apple device on Verizon is a definite possibility.

Verizon is closing in on selling 1 million units of Motorola's droid handset, according to Mark Sue, from RBC Capital...