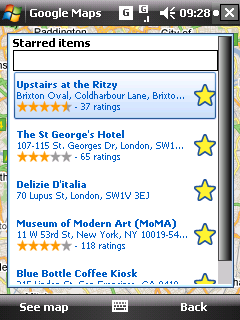 Google Maps, probably one of the best mobile applications ever created, and one I use multiple times a day since my navigation skills have totally atrophied since getting a Nokia N95 in 2007, has just been upgraded to version 3.3. What’s new? The ability to sync stared places!

Google Maps has the ability to favorite locations and then place them on a map as a star. It’s different from the “My Maps” feature that is complicated to access since it’s a layer you have to enable. Stars are like quick bookmarks in Firefox or Google Chrome, just one tap away. I’ve starred my apartment, my girlfriend’s apartment, all the places I like to visit for lunch, clubs, pubs, and any shops I fancy. The problem with stars is that they reside on your device’s local storage. Not anymore with Google Maps 3.3.

Type m.google.com/maps into your mobile browser, download the application, available only for Symbian and Windows Mobile devices at the moment, launch it and then enter your Google credentials to sync your favorites.

Update: After installing it on my Nokia E71 I noticed that the names of the stared items don’t sync, only the actual stars. For example, my address is Kalevankatu 21, Helsinki, Finland. I starred the location and renamed it “Home”. On the desktop version of Google Maps it does not appear as “Home”, instead it appears as the full address. Not perfect, but better than before.