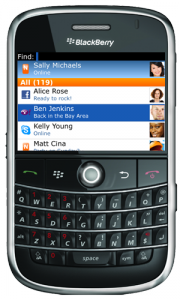 Nimbuzz, a popular multi-client instant messaging application, has just announced a native app for BlackBerry. The usual suspects like AIM, ICQ, Google Talk, and Windows Live Messenger are present, but the addtions of Skype, MySpace, and Facebook chat make Nimbuzz a serious contender. Over the summer, they released an Android version, and has been on the iPhone, Windows Mobile, and Symbian for awhile, so there’s a lot of experience going behind the BlackBerry app. I presume “native” means that the app uses proper BlackBerry APIs rather than just being a run-of-the-mill Java app that can go anywhere, but it’s still a bit vague. You can download Nimbuzz for any device with OS 4.6 and up from the BlackBerry App World for free.

Fluent Mobile (a mobile content organization and delivery company) has debuted premium features available via in-app-purchase for Fluent News. The...