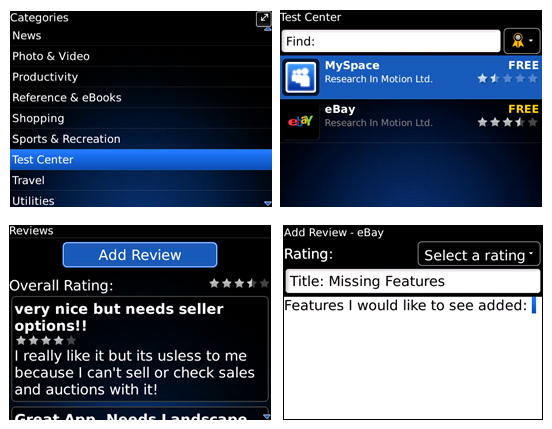 The BlackBerry App World has just included a new Test Center category dedicated specifically to beta software. By collecting feedback from users directly on their devices, the developers can squash bugs, implement new features, and deliver a polished final product at the end of it all. The section is starting off with a new MySpace app and the recently-announced eBay app, but already third parties, like Blue Sky Analytics’ Role Call Reminder Lists, are getting involved. BlackBerry enthusiasts who want to try bleeding edge apps  and developers who want to test the waters will definitely be spending a lot of time in this section, but I’d really like to see a whole blog, akin to the Google Labs or the Nokia Beta Labs that would regularly showcase early-but-official functions and software.  Still, the Test Center is a good start, and I’m curious to see what pops up there in the near future.

AT&T has pulled out the discount pricing gun, and they've gone mad. Earlier today they started to offer 50% off...