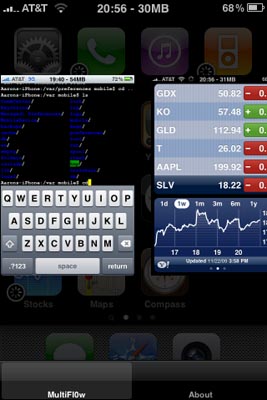 Multifl0w allows the user to continue running an iPhone app in the background by opening the app and holding down the “Home” button, just like another multi-tasking app known as “Backgrounder.” But, it’s Multifl0w’s window-based multi-tasking interface that really sets it apart from the crowd. Double-clicking the Home button brings up a gallery of iPhone app windows, allowing the user to flick through various running apps and interact with them at will. Closing an app is as simple as holding down the Home button on an open app.

Multifl0w is $4.99, which is a lot more than, say Backgrounder, which is free. But, if you want a flick-friendly window-based interface, Multifl0w is your only bet.

Call Forth The Power of Your Music in Song Summoner: The Unsung Heroes – Encore

Square-Enix recently announced the release of Song Summoner: The Unsung Heroes - Encore for the iPhone.  SS:TUH-E might look terrible...