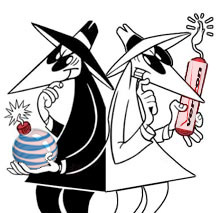 The back-and-forth between rival US wireless carriers AT&T and Verizon Wireless is as entertaining as it is good for competition. Verizon keeps rubbing their superior network coverage in AT&T’s face while AT&T keeps espousing their 3G networks’ ability to download data faster and support voice and data service simultaneously. The problem is that they’re talking about different things. It’s like showing up to a snowball fight armed with mushy peaches – you’re in the game, but you’re not exactly playing the same game. AT&T even takes it one step further with various mentions of their AT&T WiFi HotSpot is available free of charge to its customers. That’s didn’t sit well with Verizon. In fact, Verizon is countering AT&T’s WiFi HotSpot service with their very own Verizon WiFi service. Starting today, anyone with a Verizon mobile broadband plan (the kind you’d use with your USB data card) can access thousands of WiFi hotspots throughout the US, Canada and Mexico.

The Verizon WiFi service presumably piggybacks on Boingo Wireless’s WiFi network, which Verizon partnered with earlier this year to provide WiFi access to their customers. The move comes just in time, as sales of data-hungry smartphones like the Motorola DROID and HTC DROID Eris are likely to straing Verizon’s 3G data network.

Verizon’s WiFi network should give AT&T a bit less firepower in the Verizon vs. AT&T commercial wars. The ball’s in your court, AT&T.