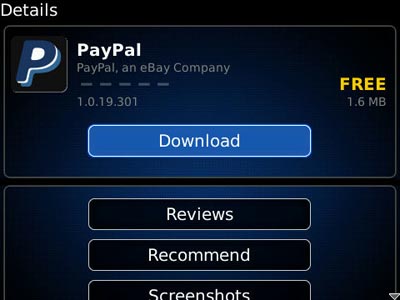 PayPal is launching a new application that lets you send cash from your account to whoever you want right from your BlackBerry. It integrates with the native contact list for added convenience, and also has access to your account balance and transaction history. These two companies have been cozy ever since the BlackBerry App World launched, since RIM chose PayPal as the exclusive payment method (although carrier billing is apparently on the way). “Send Money” will be available in Canada, USA, UK, France, Italy, Spain, Netherlands, Germany, Belgium, Luxembourg, Ireland, Portugal and Australia, but there’s apparently some confusion about the launch, since the original press release was taken down, and Send Money can’t be found anywhere in App World. In any case, when it does show up, it’ll be free. Versions for Android (from which the above pic is unabashedly Photoshopped) and iPhone are also available, which you can find here.

Just when you thought there could be no more BlackBerry love via Bell before the new year... New word has...