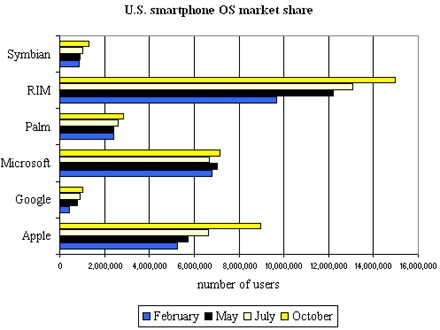 ComScore has released some survey stats on North American smartphone users gathered in October, revealing that BlackBerry still has the largest penetration, and that iPhone maintains second place and the strong lead over Windows Mobile it has had since 2007, according to other metrics. Here’s a quick rundown of the October numbers:

It’s a little sad to see Android’s eentsy, teensy little bar and modest growth, despite showing so much promise in the last six months, but maybe 2010 will see a change in the wind. If it’s any consolation, webOS didn’t even get enough respondents to merit an entry on the chart. iPhone’s progress is perpetually impressive, but RIM’s looks just about on par, and they have a nice head start to boot.

If you already own and run 'Hockey Scores' on your BlackBerry, you'll be pleased to know that it has been...