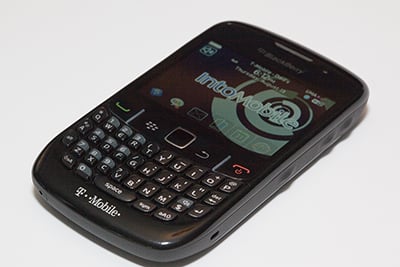 The BlackBerry 8520 Curve, code-named “Gemini” once upon a time, is the first in a new family of optical trackpad-toting smartphones from RIM. Back in the days of the 8700, many old-schoolers cried foul when their beloved jog wheel was to be replaced with a trackball in the original Pearl 8100, but most welcomed the new input with open arms – after all, it was certainly worth a slight loss in precision for something way cooler, right? It didn’t take long for apps to take advantage of the multicoloured LEDs inside the Pearl, then manufacturers to pump out customized trackballs when those lights were replaced with straight white ones in newer models.

Aside from occasionally getting grit stuck underneath, the trackball had a good run on BlackBerry, supporting devices all the way through the latest Tour and Curve models. Now we’re on the brink of similar transition, this time with trackballs exiting stage left. Based on what we’ve seen of the upcoming Onyx, and supposedly the updated Wi-Fi Tour, the trackpad will be the new standard for BlackBerry, with the odd SurePress device thrown in for kicks.

Now, the BlackBerry 8520 isn’t what you’d call the higher-end of the Curve line, but the slick new design does carry it a long way. Hit the jump for the full review!

Update: The BlackBerry 8530 is now out on Sprint and Verizon, and though it’s largely the same as the 8520, it merits a few extra points. Check them out in the conclusion.

The BlackBerry 8530 is now available on Sprint, a small comfort for those who have been eyeing Verizon’s version since...