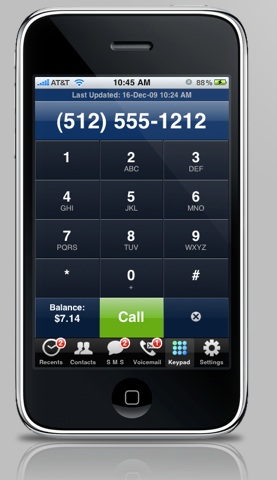 Google Voice apps were banned from the AppStore for reasons that weren’t too clear. The service allowed users to give out one Google Voice phone number that automatically rang multiple phones at the same time. It also allowed for voicemail transcription and allowed users send SMS text messages on Google’s dime. The decision to pull Google Voice apps put Apple in hot water as consumer criticism moved the FCC to kick off an investigation into Apple’s motives for banning Google Voice apps.

VoiceCentral, one of the banned third-party Google Voice apps, was kicked off in July 2009, and has yet to make its way back to the AppStore. The app’s return to the iPhone, says Riverturn, is slated for 2010, and will completely sidestep the AppStore. VoiceCentral Black Swan will be a web-app capable of supporting all Google Voice features – send/receive phone calls, transcribe voicemails, SMS text messages, Google contacts, and a dialer screen. Unfortunately, because Black Swan isn’t a native iPhone app, it doesn’t have access to your iPhone contact list or your iPhone earpiece. That means you’ll have to import your contacts into Google Contacts, and all audio comes through the speaker or headphones, instead of the earpiece.

This is Black Swan in action:

HTC is one of the more developer friendly smartphone makers out there. The company usually takes a hands-off approach to...