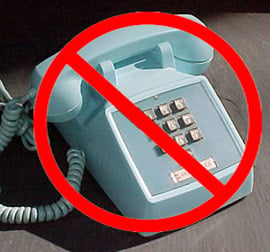 In a world where 1 out of every 5 US homes have shunned landline phones in favor of a wireless-only lifestyle, it’s clear that wireline phone service is dying a slow death. Every year, more and more Americans are opting to use their mobile phones as their only means of communications. AT&T apparently wants to hasten the death of the wireline telecom infrastructure that, for decades, was its core business. In a 32-page comment about their thoughts on an all-IP telephone network, AT&T asked the FCC to abolish regulations that require the telecom giant to support and maintain landline infrastructure. Taking things a step further, AT&T asks the FCC to set a deadline for completely phasing out wireline services.

While the increasing proportion of wireless-only homes might seem a compelling argument to abandon landline networks, there’s a flip side to the story. Something like 1 in 5 Americans still depend on the dial-tone box connected to the telephone jack in their home. Unfortunately, AT&T’s argument to adopt VoIP-only phone service throughout the US doesn’t make any provisions for Americans still tethered to a corded phone.

A short-term phase-out of wireline infrastructure might not be in the cards for AT&T, but you can’t blame them for trying. Landline infrastructure is significantly more expensive to maintain and has been generating less and less revenue over the years. The total number of landline phone calls dropped 42% between 2000 and 2008, leading to revenue declines of 27% from 2000 to 2007. And with their wireless infrastructure improvement costs soaring into the tens of billions of dollars, it makes sense that AT&T wants to move away from landlines.

Now, it’s up to the FCC to determine how to setup the nation’s transition to a VoIP-based telephone network. This should get interesting.