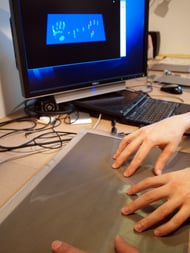 IFSR, on the other hand, allows for quick and responsive touch inputs, like a capacitive touchscreen, while still supporting pressure-based inputs, like a resistive touchscreen. It works with multi-touch gestures and even detects inanimate objects. Better yet, the IFSR tech is relatively cheap – it costs just $10 for a square foot of the touchscreen panel, even less for smaller applications. And, the tech is expected to start popping up in consumer electronics in 2010.

These videos demonstrate the IFSR tech in action: