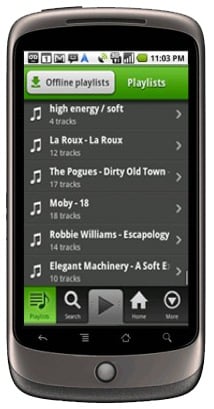 Mobile music service Spotify has graced Android, iPhone, and Symbian devices abroad, but has yet to pierce the thick shell of licensing surrounding North America. All that may change come January 5, when Google is rumoured to announce their upcoming Nexus One Android smartphone. Spotify is an aggressive contender in the mobile music scene, offering on-demand streaming of music from your playlist, local caching via over-the-air downloads for offline access, Word has it that Google and Spotify struck a deal wherein Google would pay out $3 – $4 per user per month to cover licensing and offer the service for free to end users – a hefty investment to say the least, but a price Google needs to pay if they want to butt heads with iTunes. The deal hasn’t necessarily been sealed, but we’re hoping it has.

The touchscreen slate from Sony Ericsson called Kurara has been pretty extensively explored, but it looks like it will be...