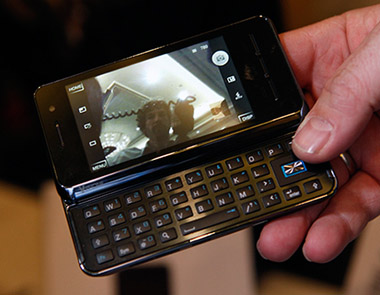 Remember the VPhone, the one that we’ve seen passing the FCC hurdle. It’s live at the CES and it promises to be the first Android smartphone with video calls (even on EDGE). Wired got a chance to play with it, and we’re expecting our CES team (which unfortunately doesn’t include the truly yours) will also spend some time with it.

You’ve probably already heard the specs, but they are worth repeating nonetheless. The VPhone comes with a 5-megapixel camera with auto-focus and flash, 3.5-inch WVGA capacitive touchscreen, EV-DO Rev. A (it’s heading to Verizon or Sprint?), 256MB RAM coupled with 512MB ROM, microSD card slot, WiFi, Bluetooth, whereas Marvell’s PXA 310 625MHz CPU is running the show.

What’s also interesting is that Saygus hopes to have Skype on board as a partner and deliver Skype video calls. Now that would be something, don’t you think? 😉

Skype goes beyond computers and phones into TV sets

Not exactly a mobile news, but kinda related. Skype is partnering with LG and Panasonic to embed its service into...