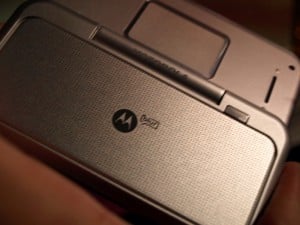 CES 2010 hasn’t even officially gotten underway and we’re already getting hit with product launches. Motorola took the time during their pre-CES shin-dig at the Revolution Lounge in The Mirage to introduce the world to the quirky-yet-innovative Motorola Backflip, previously known by its “Motus” codename. Rather than flip out sideways to reveal a QWERTY keyboard – as we’ve seen with countless QWERTY flip phones in the past – the Motorola Backflip’s keyboard flips out from, you guessed it, the backside of the device. As expected, the the backwards flip mechanism frees up the backside of the display for Motorola’s rear-facing “Backtrack” touch-sensitive trackpad, making the Motorola Backflip the first smartphone to feature a trackpad behind a touchscreen display.

The Motorola Backflip runs on Android 1.5 OS, customized the Motorola BLUR UI/service that pulls down data from your social networks and news feeds and displays them in near real-time on the homescreen. The Backflip sports a 3.1-inch capacitive touchscreen, 5-megapixel camera with LED flash, 3G data, WiFi, GPS, rear-facing trackpad and of course that innovative QWERTY keyboard. When in the closed position, the keyboard backlight dims and the keyboard goes inactive, which prevents accidental key presses. And, thanks to the unique way the keyboard flips out, the Backflip creates its own stand/dock.

For those of you worried about having to deal with the older Android 1.5 OS on your Backflip, Motorola CEO Sanjay Jha confirmed that the Motorola Backflip will be getting an update to Android 2.1 in the near future. Jha says the Backflip will “hopefully” launch on a US carrier in the Q1 2010.

In our quick hands-on time with the Backflip, the Backflip felt like a solid phone. Because there’s no sliding QWERTY keyboard mechanism, there’s no jiggle or wiggle to speak of – the folding hinge was firm enough to impress. The Backtrack trackpad takes some getting used to – since you can’t see what your fingers are doing, accuracy is an issue. As for the form-factor, you’ll either love it or hate it. We’re leaning towards the latter, but we’ll have to spend more time with the Backflip before poo-pooing Motorola’s most innovative handsets in years.

Video is on the way, for now, enjoy the photo gallery!

Hands-on with the HTC Smart from CES 2010

When you think of a "smartphone," you're probably thinking of some sort of advanced device running one of the traditional...