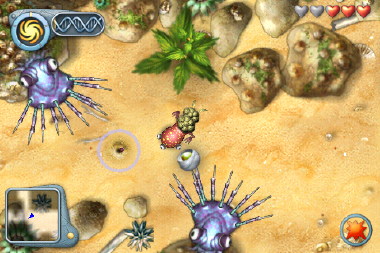 It’s all about previewing iPhone games here at CES 2010. EA Mobile wasn’t just showing off their The Sims 3: World Adventure iPhone game in Las Vegas, they were also giving previews of the Spore Creatures game for iPhone. We had a chance to check out the new iPhone game at CES 2010, and it’s even better than the original top-selling Spore Origins.

In Spore Origins, we were put in control of an amoeba-like organism as it swam around a primordial soup in search of food and evolution-boosting DNA. The original game was all about choosing the evolutionary path for your organism. This new Spore Creatures game picks up where Spore Origins left off and puts you in control of your organism as it makes the transition to land. You can evolve feet, attack weapons, defensive traits, eyes, and even different colors. Not content to just push out a sequel title, EA Mobile also decided to make the environment interactive and enemy creatures smarter. You can push and pull objects to get where you need to go, while trying to time your attacks against enemies for when they’re at their weakest.

Spore Creatures still relies on tilt-controls, just like the original. You can still customize your creature any way you see fit. But, with a whole new world to explore, Spore Creatures is sure to keep you entertained for hours. EA Mobile says it’s coming soon, so we’ll be keeping a close eye on EA Mobile. Stay tuned for more info!

If there's one thing we love about tech conferences like CES, it's the previews we get on unreleased hardware and...