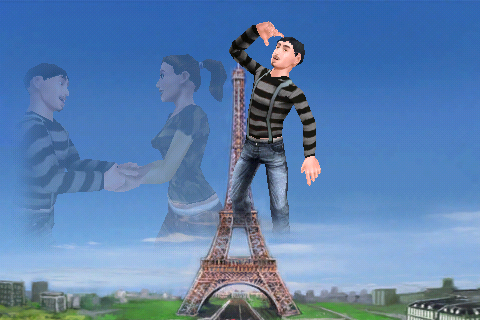 If there’s one thing we love about tech conferences like CES, it’s the previews we get on unreleased hardware and software. This time around, we were treated to a preview of the latest 3D game for the iPhone – EA Mobile’s The Sims 3: World Adventure. It’s the latest addition to the popular Sims franchise, putting you in control of the life and times of a Sim character. The Sims 3: World Adventure game is available for your desktop as an expansion pack to the original title, but will be offered as an entirely separate game on the iPhone AppStore. We had a chance to check out the new game and it’s host of new gaming features at CES 2010, and it’s looking good.

The original Sims 3 gaming title for iPhone put you in control of a virtual Sim character in the virtual Sim world. You could customize the look of your character’s appearance and even give your Sim different personality traits that would allow you to explore the Sim world in different ways. You decided when to sleep, how much money to spend on furniture, and whether or not you want to be a jerk or Mr. NiceGuy. The Sims 3: World Adventure picks up where the original game left off and puts you in control of your Sim as they travel between three distinct “worlds.”

The Sims 3: World Adventure features a completely animated world, a new airport for your travels, and a bunch of new mini-games to keep you busy for house. You can create your Sim as you see fit and take him between The Sims 3: World Adventure and the original The Sims 3 game, if you have both installed on your iPhone. And, with even more character customization options (literally billions), you’ll never run out of personality options.

A really cool web service called FastPencil aims to get artists, writers, and editors together online to make a book...