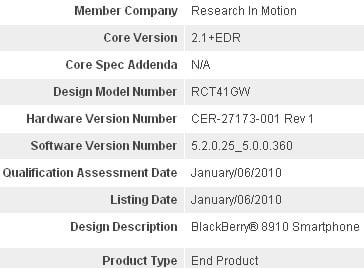 The Curve 8900 might seem a little dated now that every BlackBerry and its mom is getting a trackpad, but a recent submission to the Bluetooth SIG has suggested that maybe an updated model is on the way. If the 9100 Striker and 9650 Essex are any indication, RIM isn’t shy about recycling old form factors and tacking on needed stuff  (potentially 3G, in the 8900’s case), so I wouldn’t expect anything mind-blowing from an 8910 model. The certification docs don’t give us much in the way of specifics, leaving what to expect entirely to our colourful imaginations. Though the last in the Curve family, the 8530, was impressive in design and function, its screen and camera quality was wanting. With a fresh batch of features, the 8900 family could very well roll with the big boys like the 9700 Bold, but we’ll have to wait and see what exactly the 8910 is bringing to the table.

UPDATE: Wow, work it Ronen.  BerryReview already has a pic of the device in quetion. 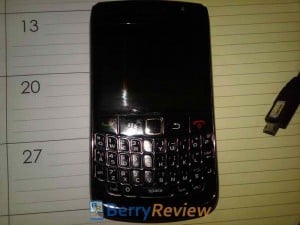 Slacker Radio Announced for webOS, Wireless Caching for Everyone Else

The partnership with ABC News wasn’t the only thing coming from mobile music service Slacker at CES 2010 – they’ve...