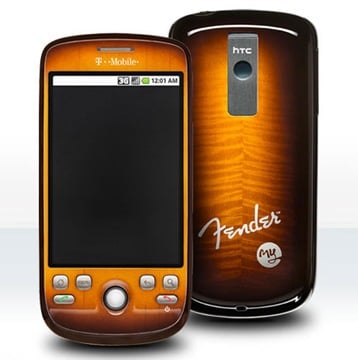 T-Mobile myTouch 3G (known as the HTC Magic in other circles) is getting a pretty slick update come January 20th. By teaming up with Fender and Eric Clapton, T-Mobile will be able to preload this sucker with a bunch of classic songs like “My Father’s Eyes” and “Layla”, along with a few others from Avril Lavigne, Brad Paisley and Wyclef Jean. If that wasn’t enough, there’s also some apps on there for the music buffs, like Guitar: Solo (a guitar simulator) and something called Music Light. T-Mobile already has their hands busy with the Nexus One launch, but this is a nice update for the folks who put a bit more weight in style than function. If you think it’s just a pretty paint job, there’s a whole lot more to it than that – T-Mo’s going to be launching custom music sync solution from doubleTwist, and a host of new accessories (including a Fender carrying case and “Rock Dock”), and new battery doors later on.

Remember the HTC Bravo? 3 Sweden will be getting it in March, according to tipsters, and gives us a reasonable...