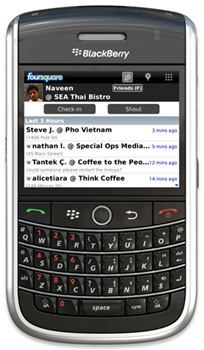 Foursquare has been all the rage with the kids these days – checking in all over the place, “earning” goofy badges, claiming the title of Mayor for a favourite port-a-potty, and generally spamming friends and family with notifications on Facebook and Twitter. It’s been making the rounds on webOS, Android, and iPhone, but so far it’s only been in closed beta for BlackBerry – until today, anyway. In a nutshell, Foursquare allows its users to share their where, and offers discounts to loyal, repeat customers at participating businesses. The goal is to promote discovery and sharing of cool stuff around town, which is a noble enough goal. The Storm version is still in the works, but anything else with a trackball should work fine. If you feel like keeping especially meticulous tabs on where you’ve checked in, Foursquare has recently included iCal compatability, so you can see all that check-in data on a calendar. Woo? Hit up foursquare.com/blackberry for more info.

If you’re looking for something marginally less obnoxious, Yelp has recently included a similar checking-in system, minus the superficially-rewarding badge system.

Retro gamers will be happy to hear that classics like Sonic the Hedgehog, Ecco the Dolphin, Shining Force, and yes,...