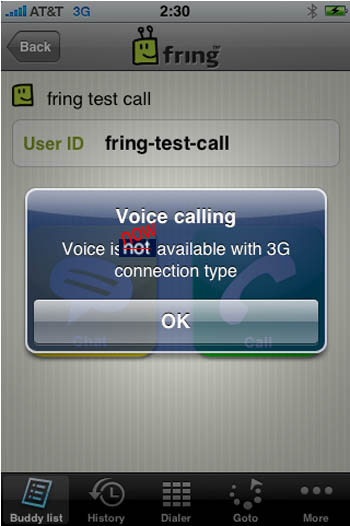 Free voice calls, that is, as long as you have an iPhone 3G and a VoIP app that lets you make internet voice calls over the 3G wireless data network. How is that possible, you ask? Well, Apple has apparently done an about face on their policy that prohibited VoIP apps from using a carrier’s wireless network to make free voice calls. Following AT&T’s decision to allow VoIP on its 3G network, Apple has opened the doors to a whole new world of VoIP calling, where iPhone users can make no-cost calls to other VoIP users from anywhere they please (as long as they have a decently strong signal). The implications of the move are huge – AT&T risks losing revenue from its wireless voice business if customers wholesale adopt 3G VoIP calling. For the customer, though, it doesn’t get any better than this.

VoIP iPhone apps, like fring, have been available for a while. But, their usefulness was previously limited to WiFi networks (unless you had a jailbroken iPhone, of course). You could make free phone calls from your iPhone’s fring app, but only if you had a WiFi connection handy. Today, that all changes. fring has announced that it’s iPhone app is now completely functional over a AT&T’s 3G network. That means fring users can make free voice and video calls to other fring users, Skype, GoogleTalk and MSN on both WiFi and 3G networks!

“fring users and our team alike are very excited that Apple Inc. have allowed independent iPhone VoIP applications over 3G networks, letting users make voice and video calls over whichever internet access suits their needs at any given place and time,” said Avi Shechter, Co-Founder & CEO of fring in a statement released today.

Now that VoIP is officially allowed on AT&T’s 3G network, will we see more iPhone users adopting VoIP apps as their voice call method of choice? That could hurt AT&T’s bottom line in the long run, while putting additional stress on their network. With the iPad expected to bring even more pain to AT&T’s data network later this year, things should get interesting for Big Blue.