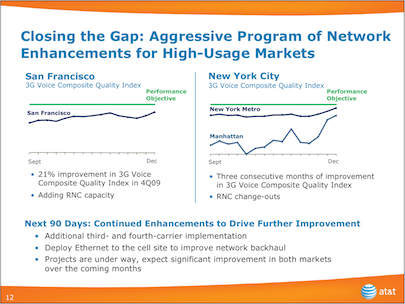 AT&T just reported that they brought on a near-record 2.7 million new wireless customers in the last few months of 2009, which is great and all, but we have to wonder how all those new customers are going to affect network performance in 2010. Thankfully, AT&T has put together a handy little presentation that includes its plans to improve its 3G voice network performance over the next few months. The US iPhone carrier has been hit hard with bad press about its 3G network dropping or not connecting calls, but it says that it’s working toward some sort of “performance objective” for its NYC and San Francisco markets.

In both the SF and NYC markets, AT&T says that they’ve managed to improved 3G Voice performance for three consecutive months. The carrier is apparently aiming to meet a performance objective goal that they don’t bother to define, but it’s still reassuring to hear that they’re keeping an eye on voice quality issues. The most dramatic improvement comes in the Manhattan area, as you can see from the graph above. 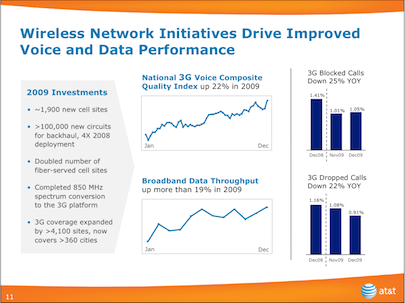 Nationwide, AT&T has improved 3G voice performance some 22% throughout 2009, with a 25% reduction in 3G blocked calls (calls that never get connected), and a 22% reduction in dropped 3G calls compared to 2008.

And, now that AT&T is officially the US data provider for the Apple iPad, AT&T has a lot of work to do to shore up its data network for another wave of data-hungry customers clawing for a piece of AT&T’s 3G network. To that end, the next 90 days should see significant improvements in the SF and NYC markets, thanks to “projects” that are under way.