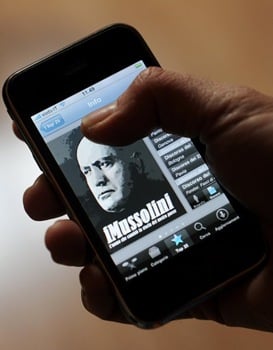 iTunes Italy’s number two app is causing a lot of controversy after its release last week. Disclaimed to be a strictly historical (and in no form a political or ideological tool), iMussolini has racked up over 1,000 downloads per day. The iPhone app gathers up audio, video, and text of the infamous fascist dictator, for easy mobile access. I had never really considered the history app market as a big thing, but when you take big figures like this that everyone has heard of but maybe not necessarily had the time to read up on, and make their story mobile-friendly, there’s a lot of potential for legitimately teaching the world at large. If you’re wondering if Mussolini would actually be good reading, here’s a snippet of his declaration of war on France and England from 1940:

This gigantic struggle is nothing other than a phase in the logical development of our revolution; it is the struggle of peoples that are poor but rich in workers against the exploiters who hold on ferociously to the monopoly of all the riches and all the gold of the earth; it is the struggle of the fertile and young people against the sterile people moving to the sunset; it is the struggle between two centuries and two ideas. Now that the die are cast and our will has burned our ships at our backs, I solemnly declare that Italy does not intend to drag into the conflict other peoples bordering her on land or on sea. Switzerland, Yugoslavia, Greece, Turkey, Egypt take note of these my words and it depends on them and only on them whether or not they will be rigorously confirmed.

Hooah. Beyond deleting a few offending reviews praising Mussolini, Apple doesn’t seem to have any plans to censor the app from iTunes. In order to counterbalance some of the social backlash, 25-year-old developer Louis Marino is hoping to release something similar for Gandhi next.

Firefox for Maemo is in the RC3

Mozilla has released the third release candidate of Firefox for Maemo platform. The emphasis was put on improving overall performance,...