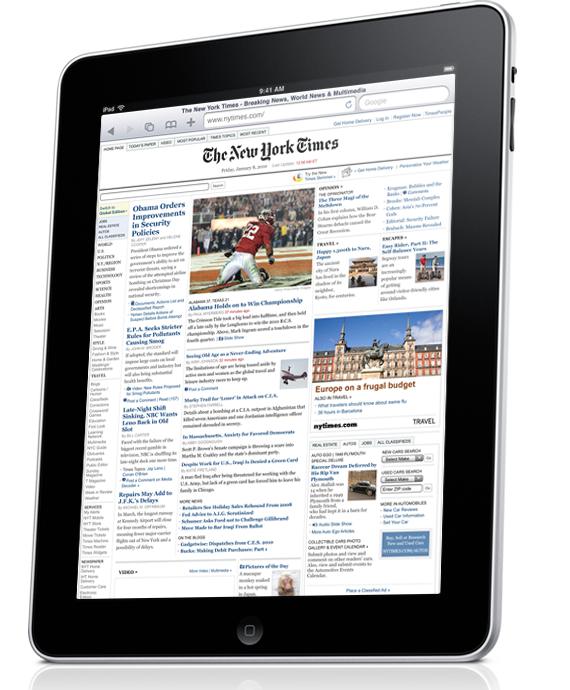 The lack of Adobe Flash support on the iPad is causing Apple some grief this week. Not only has Adobe implied that your iPad fapping [definition] sessions won’t be as fulfilling with support for Flash-based porn sites, one potential iPad customer has filed a complaint with the US Federal Trade Commission that calls Apple out for displaying Flash-based content on iPad promotional materials. Apple has been flaunting the iPad all over the web recently, but as web designer Paul Threatt (a damn cool surname) pointed out to the FTC, it’s been showing off websites as if the device supports Adobe’s Flash technology. It doesn’t, and that’s the problem.

Whether or not you believe Flash support is a critical feature in a web-surfing tablet, or that Flash needs to die off and bequeath its hold over rich web media to HTML5, there’s no denying that it’s wrong to mislead consumers into thinking that websites using Flash media will render properly on the iPad. That’s exactly why Threatt filed his complaint with the FTC. “I don’t hold anything against them for not supporting Flash,” said Threatt. “It’d be great if they did, but what I don’t want them to do is misrepresent the device’s capabilities.”

In his iPad announcement demo, Steve Jobs showed off the iPad browsing the full New York Times website without any of its Flash content displayed – showing instead a missing plugin icon. A subsequent promo video then showed the iPad browsing the NYT website complete with Flash content. Apple apparently does this in several iPad ads, and folks like Mr. Threatt are crying foul over Apple’s false advertisements.

We’ll have to wait and see what action the FTC takes on Threatt’s complaint. This could get interesting.

[Update]
Apple isn’t waiting for an official FTC inquiry. MacRumors reports that Apple has already pulled Flash content from their iPad promo materials. All Flash content is now replaced with the all-too-familiar little blue lego icons that indicate that Flash is not supported on your browser/device.

Apple earns $208 for every base iPad model they sell

Apple has proven with the iPhone 3G and iPhone 3GS that they know how to work profit margins. The iPhone...