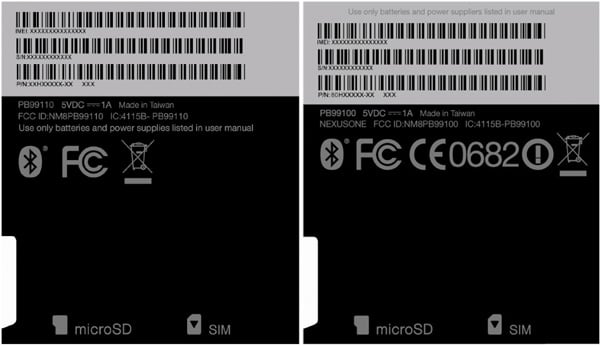 The Google Nexus One is already available on T-Mobile USA and will soon hit Verizon’s network as the gotta-have Android phone of the year, but AT&T has been conspicuously missing. That is, until today – an AT&T 3G-compatible version of the Nexus One has just popped up on the FCC’s website, hinting at the possibility that Google will soon release a new Nexus One variant capable of pulling down 3G data on AT&T’s wireless network. If true, the Nexus One will be available on three out of the four top US wireless carriers – Sprint, it seems, is being left out of the party for now.

Engadget is reporting today that the FCC has unveiled a new identification label for an as-yet-unannounced Nexus One variant. The label you see on the right (above graphic) lists an ID number that corresponds to the current T-Mob-ified Nexus One. The label on the left sports an ID number that differs by a single digit, indicating that it’s a variant of the original. FCC doc also confirm that the new variant supports 3G on WCDMA Bands I, II, and V, making it compatible with 3G bands used by AT&T in the US. From the looks of it, the Nexus One is headed to AT&T!

Although Google has previously neglected to mention AT&T as a partner for their Nexus One, it makes sense to open up Google’s first own-branded Android phone to a wider market. Unless, that is, we’re looking at a label for the “Moogle” phone (Nexus Two).

This isn't new, but it's just the right time for re-run. The original iPad commercial rocks, though it doesn't say...