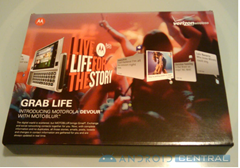 The Motorola droid’s little cousin continues its ongoing march to a commercial release, marked now by a box containing marketing materials. Verizon branding is clear as day, as well as the inclusion of the blur social media interface and services. Code-named Calgary once upon a time, the Devour has a 3 megapixel camera, Wi-Fi, GPS, optical trackpad, 3.5mm headphone jack, 320 x 240 touch display, and a magnetometer. While there’s no new information regarding when we’ll actually start seeing this device, considering we saw the Devour in VZ’s inventory and the device has been in the rumour mill since the spring, A couple of other bits of eye candy have made it through the cracks, if you’re hankering for a closer look. it wouldn’t be surprising to see an announcement at Mobile World Congress in two weeks’ time.

Is your Palm Pre Plus giving you wacky GPS performance?

The Palm Pre Plus was recently released as Verizon's answer to webOS fans not willing to hop on Sprint's network...