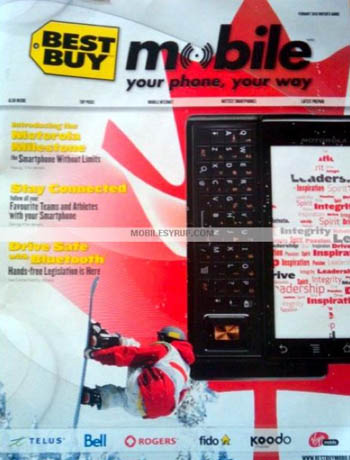 The Motorola Milestone, aka DROID has been a tightly guarded secret in Canada. With knowledge that the Milestone will indeed be making an appearance on the TELUS network, all of my contacts within the company have been tight-lipped at best… and I have to give them all credit for being consistent on the topic. My most recent correspondence with TELUS regarding the Milestone resulted in this reply:

TELUS doesn’t comment on rumors and speculations but as previously mentioned when TELUS and Moto announced the upcoming release of the Milestone with TELUS, the device will be available in early 2010. We are as excited to bring this product to Canadians as many of your readers are and we will let everybody know when it’s launching officially as soon as we can.

A pretty stock answer, and consistent with their position all along.

With that said, the evidence is starting to pile up that the Milestone may be coming soon. In an upcoming edition of the Best Buy Mobile Buyer’s Guide, you can clearly see a the Moto Milestone emblazoned on the cover. While no pricing or launch date is given, this is surely good news for those eagerly awaiting the arrival of the Milestone in Canada.

Vodafone's CEO, Vittorio Colao, has seen better days as the company's investors are pressuring him to "handle" the group's underperforming...