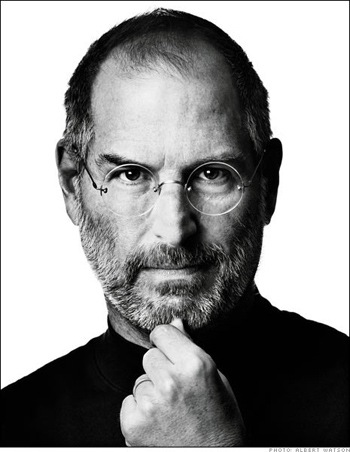 If there’s one thing we like about Steve Jobs, it’s that he isn’t afraid to go on the record to say how Apple is better than competitors like Google and disappointing tech companies Adobe. We can’t say we like his sense of style (or lack thereof), but Mr. Jobs probably doesn’t care what we think about his wardrobe anyway. What Jobs does care about, though, is the state of affairs at Apple. The head of the Apple empire went on stage recently to talk to employees about how Google and its Android OS isn’t a threat to the iPhone, and how Adobe just sucks at what they do. In other words, classic Apple.

The Apple Town Hall Meeting, where Jobs took the stage to preach his thoughts on various subjects, gave the world new insight into Steve’s stance on Google and Adobe. When it comes to Google, Jobs pointed out that Apple didn’t jump into the online search game that Google has been dominating for year, but that Google decided to come play in the mobile phone waters that Apple has been so successfully trawling with the iPhone. Jobs went on to say that Apple won’t let Google kill the iPhone, and that Google’s “don’t be evil” mantra is “a load of crap.”

It’s not just competitors to the iPhone that get Steve’s black turtle-necks and hoodies in a bunch, either. In response to renewed chatter about how the iPad continues the iPhone‘s years-long boycott of Adobe Flash technology, Jobs stated that Apple isn’t using Flash because it’s buggy. In no uncertain words, Mr. Jobs asserted that Adobe is full of “lazy” talent that just can’t seem to innovate to Apple’s standards. He noted that Mac crashes are usually caused by Adobe Flash, and that the technology won’t be relevant once HTML5 becomes mainstream.

And, of course, there was talk of the next iPhone. According to the man with the master iPhone-plan, Apple is working on the next iPhone and Jobs believes that it will be “an A+ update” to the iPhone 3GS. That’s a bit worrisome, for people like us. We would have expected the hype-maker himself to talk about the upcoming iPhone as another innovation, a breakthrough product, something that will make everyone want to buy an iPhone. Instead, Jobs referred to the new Apple smartphone as an “update.” That’s essentially what the 3GS was to the 3G, and that’s not going to cut it in today’s smartphone space. Let’s hope he’s being modest here.

Suffice it to say, Steve Jobs is in the business of creating hype as much as he is responsible for creatign incredible gadgets that evoke emotions like envy and desire. We’d say he’s firing on all cylinders so far.

More with the iPad jokes. As you're about to see, there's a room to tweak Obama's State of the Union...