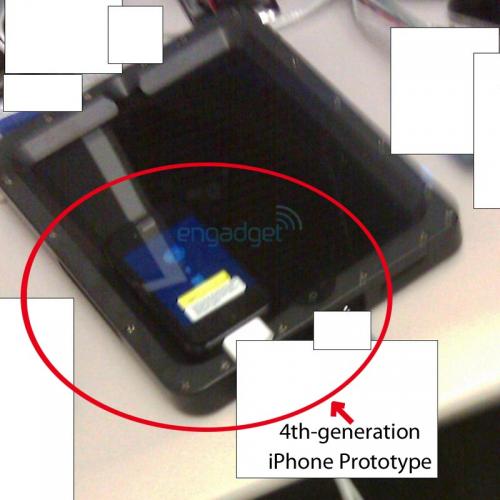 With all the hype and noise surrounding Apple’s iPad tablet announcement, it seems that the blogosphere may have overlooked a potential image of the next-generation iPhone (iPhone 4G) hanging out on top of what turned out to be the iPad. The photo of the next-generation iPhone looks strikingly similar to the current iPhone 3GS which might explain why it was overlooked.

New reports today are suggesting that the iPhone you see pictured here is in fact one of Apple’s unreleased next-gen iPhone prototypes. Apple usually throws around multiple iPhone prototypes before deciding on the final production hardware, so it’s not clear if what we’re seeing here is what we’ll be seeing Apple launch in 4-5 months’ time. Still, the source of the rumor, from AppleInsider, supposedly has a perfect track record with this kind of info. ‘

The image quality isn’t exactly up to what we’d call “decent,” but the grainy image does offer some rumor-fodder. The bezel around the pictured iPhone appears to be black, rather than a strip of shiny metal. Although, we could just be looking at an iPhone wearing a black case or skin.

More intriguing is the possibility of the oft-rumored front-facing camera on the next-generation iPhone. There’s a blotchy white spot next to the earpiece that could be where the video-chat camera lives. It could also be ambient light or proximity sensor on the iPhone, which often shows up in pictures taken from certain angles.

We know there are next-gen iPhone prancing around in the wild, so it’s not too far-fetched to imagine that one of the prototypes would have made friends with an Apple iPad. But, remember, take all these kinds of rumors with a grain of salt. Or maybe two.

Apple rolls out iPhone OS 3.1.3, plays with our emotions

There's nothing like a minor point-update to the iPhone OS to play with our emotions, and Apple really knows how...