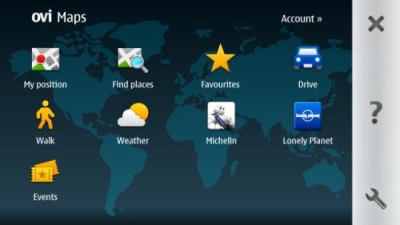 Nokia’s Ovi Maps with free navigation has been downloaded over 1.4 million times in only 7 days.

I would have downloaded it to check it out, but sadly my mobile phone is not compatible (Nokia E71), and I don’t plan on buying a new handset just to use Ovi since Google maps works just fine for me. Google’s Android operating system has free turn by turn navigation as well, but it only works on Android 1.6 and up, and only in North America. How many months do you think it’ll take Google to catch up and offer not only free turn by turn navigation for everyone around the world, and more importantly add the single feature that Ovi Maps has that Google Maps doesn’t, the ability to store maps on a memory card to save on data usage?

Press release after the jump.

Espoo, Finland – Nokia has today announced that since the 21 January 2010 launch of the new version of Ovi Maps with free walk and drive navigation, there have been over 1.4 million downloads. The one million mark was reached just one week after the launch.

“We’re averaging a download a second, 24 hours a day,” said Anssi Vanjoki, Executive Vice President, Nokia. “When we announced free walk & drive navigation we knew it would be a game-changer. The number of people now using their Nokia for navigation, and as a result looking for more location-aware software, is growing faster than even we predicted.”

The success of the new version Ovi Maps is a key part of Nokia’s strategy to lead the market in mobile maps, navigation and location-based services. By leveraging its investment in NAVTEQ, Nokia has been able to remove the costs associated with navigation for drivers and pedestrians and is quickly activating a massive user base to which it can offer new location features, content and services.

“This is great news for our 3rd party application developers. Within a matter of days there is an installed base of more than 1 million active users all potentially hungry for new and innovative location-aware apps,” continued Anssi Vanjoki. “For the operators too there is a growing opportunity to sell more data-plans and a complete navigation package to existing and new customers.”

From next month, all new Nokia GPS-enabled smartphones will include the new version of Ovi Maps, pre-loaded with local country map data, with high-end walk and drive navigation and access to Lonely Planet and Michelin travel guides at no extra cost.

Ovi Maps covers more than 180 countries with car and pedestrian navigation for 74 countries, in 46 languages, and traffic information for more than 10 countries. There are more than 6000 3D landmarks for 200 cities around the world. Lonely Planet and Michelin guides have information on more than 1,000 destinations globally.

Mike Manos may not be a household name, but in the data center world this guy is Bono. He setup...