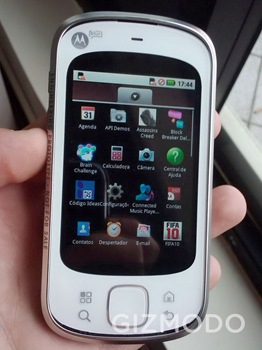 We’ve seen Motorola’s unreleased Zeppelin here and there, but not much of the software. A fully functioning device was spotted in Brazil, and Android 1.5 with motoblur is a confirmed addition. A different version surfaced in China awhile back, complete with 3.1” HVGA display, Wi-Fi, GPS, HDMI out, 3.5mm headphone jack, and 5 megapixel camera with flash, but we only got to see the hardware. We’re expecting to see the Zeppelin at Mobile World Congress in a few weeks, but the status of an American release is still entirely up in the air. Given the current sources of the leaks, it’s seeming like this particular device is destined for everywhere but the U.S. Too bad, really, since HDMI-out isn’t a feature you see on a lot of Android devices.